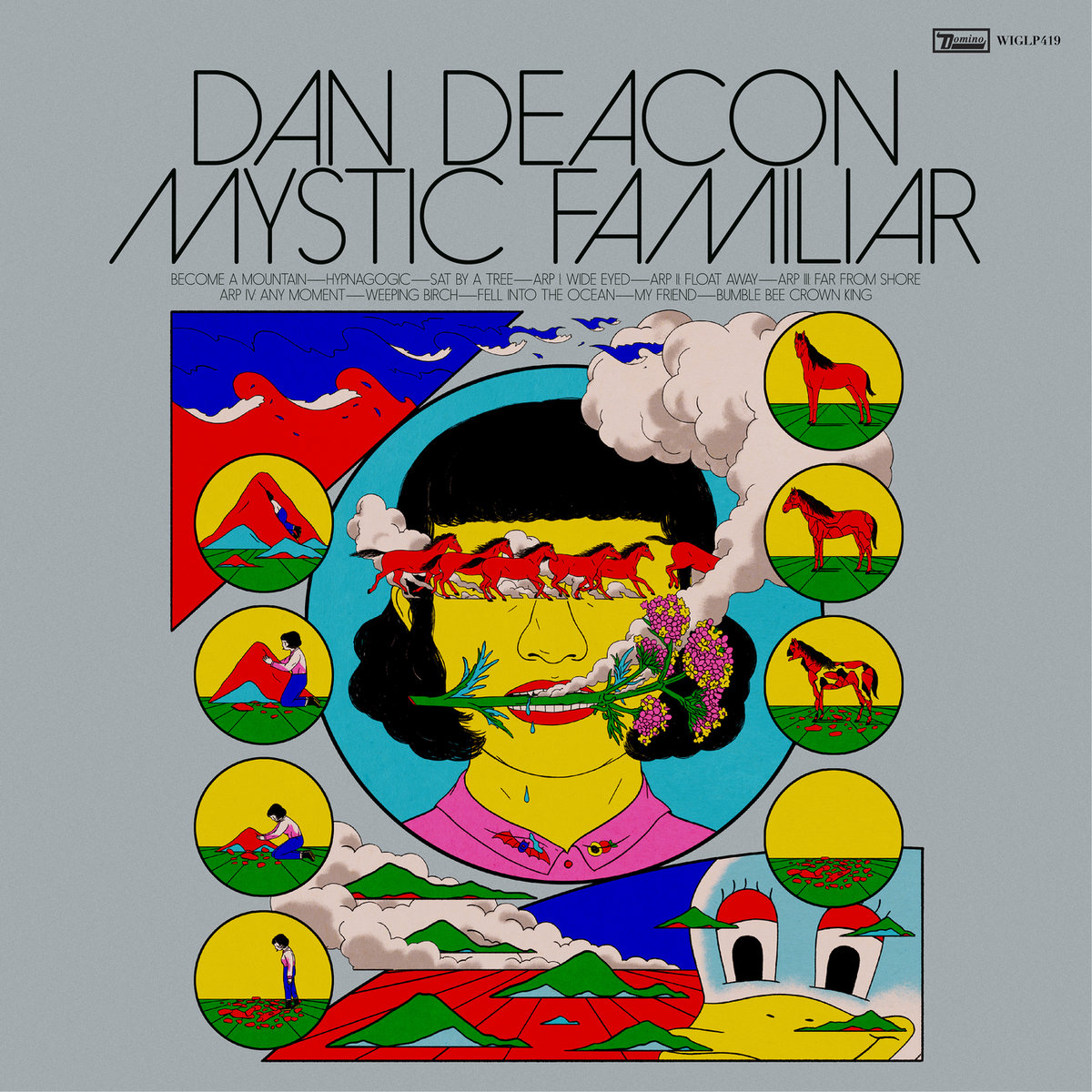 Since his commercial debut Bromst (Carpark Records, 2009), Dan Deacon has made a name for himself by making hyperactive, warm and colourful psychedelic Pop music, often utilizing sounds of toys along with synthesizers and his usually heavily processed vocals. You could compare him to Animal Collective in some aspects, but his sound is more synthetic, without apparent Rock or Folk elements.

His new album, Mystic Familiar, still retains those qualities for the most part, but for the first time we get to hear Dan’s voice without being layered tenfold and/or heavily effected by vocoders throughout. A good example for this are the singles released prior to the album, “Sat By A Tree” and “Become A Mountain”. The latter starts out very sparse for Deacon’s standards, only featuring his voice and a fast piano loop, but eventually erupting into a kaleidoscope of electronic and acoustic sounds. These “explosive” build-ups are nothing new for Dan, but always nice to hear.

Overall, the album manages to be wild and energetic but still retains a certain calming quality. The four-part “Arp” suite demonstrates this very well. It lasts twelve minutes and features several dramatic build-ups and breakdowns, but still has a meditative feel throughout, thanks to Deacon’s soft voice and the lush reverbed synthesizer drones in the background. The lyrics are often repeated like mantras and provoke associations with audio meditation tapes and psychedelic trips.
I suppose it only makes sense, since he started doing meditations and working on his mental health some time after making his last album, Gliss Riffer (Domino, 2015).
The album’s lyrical themes, along with the less processed voice give it a more mature and vulnerable feel overall than his previous work, but without losing its youthful playfulness.

One of the best moments on the album for me is the initial build-up to the penultimate track, “My Friend”. The line “I’m still alive and I’m screaming” feels so simple, yet quite powerful, and captures the mood of the whole album very well. It’s very uplifting and celebratory, with a spiritual feel, just celebrating life itself. And while this isn’t exactly a new thing for Dan, it’s done particularly well on this album. Unfortunately, I have to say that I’m a little disappointed by the actual climax that follows said build-up though. The sounds feel too linear and controlled, there’s just a fast, repetitive and linear melody instead of a proper psychedelic explosion of sound. But that’s about the only “major” flaw here for me.

Dan Deacon has shown us that he’s still alive (and screaming) and is still able to make great tunes. He’s made some changes to his sound, but overall the album is a typical Dan Deacon album, with some really great and fun psychedelic songs. It’s the kind of album that will brighten up your mood during these cold months. If that sounds interesting to you, definitely don’t miss out!

Favourite songs: Become A Mountain; Sat By A Tree